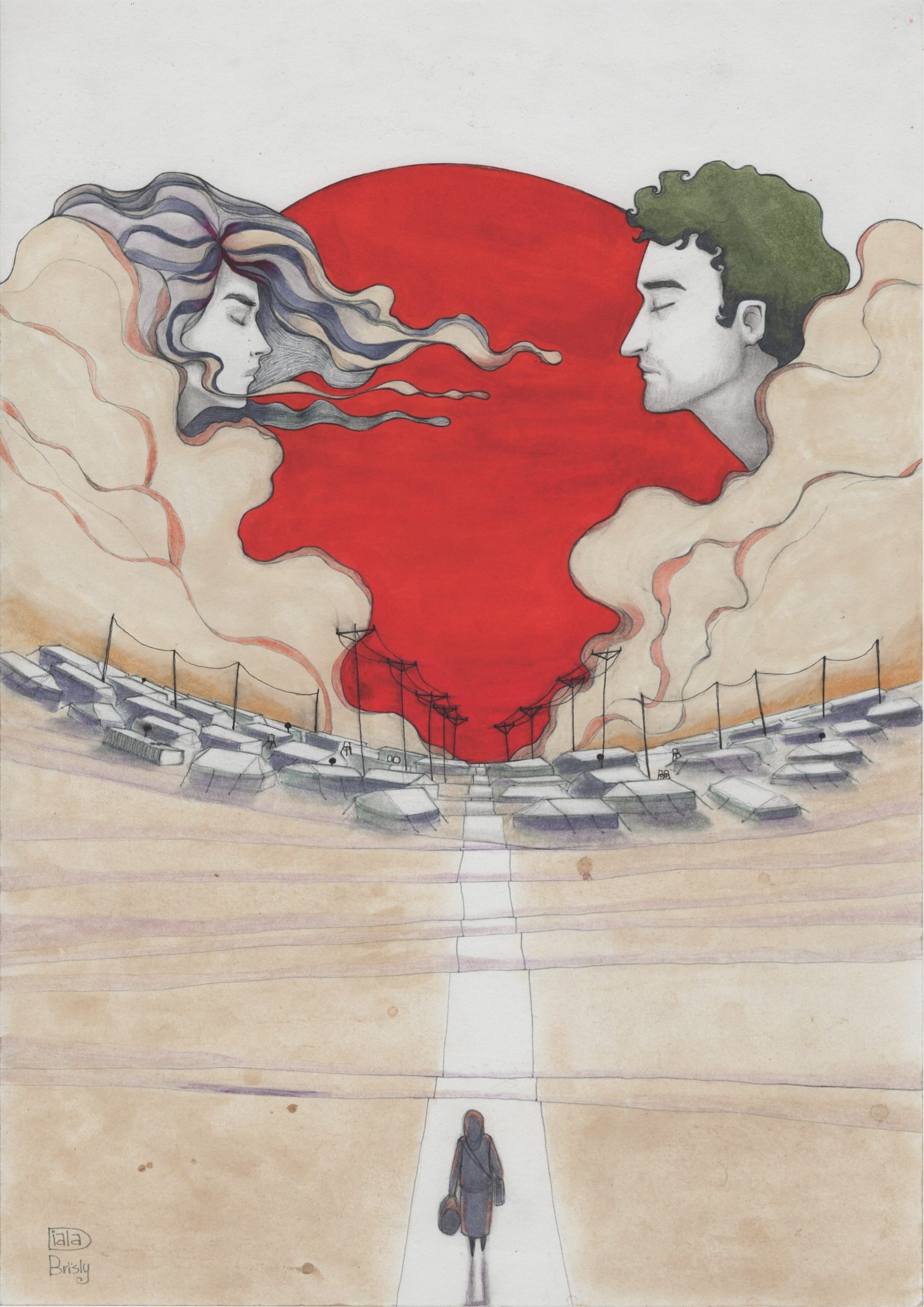 Did you know that I am engaged?

Do you know Syria is in a war? Probably you know this. I am from Daraa in Syria, a region with both city and suburbs. I consider myself pretty street smart, I know how to take care of myself in any environment! Although I am often told I am too confident and that I should perhaps remember my gender. Jordan is not as different as I expected. It smells the same, we speak the same language even if it can sound a little different. We eat much of the same food. Seeing as there are so many similarities, it confuses me that there is always so much fighting between people.

When you’re married you can be calm, that’s what everyone says.

Would you like to come to my wedding? It will be in Irbid, Jordan, sometime in May. I want a spring wedding, I don’t want to be too hot you see. I want it to be warm enough that my skin glows but not so hot that I am wiping sweat from my brow constantly during the celebrations. I will have removed all the hair from my body so there will be nothing to catch the beads of sweat.

My grooms name is Ali Taher. Do you know him? Probably not. I am sure he is well known by many and well loved. My family has known his family for many years. My family went to a lot of trouble to bring me to Jordan from Syria and into a marriage with Ali.

When you’re married you can be calm, that’s what everyone says. You will be taken care of and you have a clear purpose. You can create a family of your own. You can be safer, more secure especially if your husband has a stable job like my one does. He is 19 and works at a factory and has a good boss, he even has a work permit. You can be more certain of life when you’re married. There are many responsibilities but with good understanding (tafahom) between you and your husband it’s possible to have a happy marriage. A good understanding is very important, I will work hard early on in our marriage to listen to him but he will also need to listen to me.

Ali and I were neighbours in Syria, our fathers worked together as `sailors` (truck drivers), they would go on long journeys together. Ali has five brothers, they would often tease my sisters and I. It was a perfect storm, all those girls living next to all the boys. Our lives felt very full, we would go to school, walking with my sisters and neighbours. We would learn, play and come home. We had beautiful spaces to be in and people to meet. In the garden we had wheat, tomatoes, herbs, potatoes and much more, we could feed ourselves and there was always something to do. But I guess, it was not to last.

Seeing his face after many years is strange, his face has grown apart, the features have distanced. He has a strong face now, not the softness of a boy but angles of a man. Seeing the man in him made me recognise the woman in me, my face no longer has fullness either, my eyes probably also reveal new pains. Seeing his broadened face after many years created a warm sensation in me, one I recognise as a kind of sparkle. I’ve seen it in the movies when two people lock eyes and they seem to shine brighter. I think my eyes shine brighter when I see him.

Ali’s family left Syria, as the boys got near to enlistment age, they fled in the middle of the night, all of them. I was still young, maybe 12. We tried to take care of their garden and home thinking soon they will come back but for us it also became impossible to stay. The air strikes came often, soon our houses and our gardens were in ruins. It was terrifying everyday. My mother and three sisters made the trip to Jordan first by foot. We planned to do it in two groups for the sake of money. My father could still work but only just and it was much more dangerous. I stayed by his side as the eldest but one day he didn’t come back from work. He had been shot in the stomach I learned; one of his friends brought his body back to me. I cried for days not knowing what to do. And eventually I had to make the journey to Jordan alone. I think of my father often, I have a hole in my heart that I keep open for him. I want there to always be space in my heart for him.

Now that I am in Jordan, I am a refugee. Before I was Meera.

Have you had loss in your life? People who walk with loss are all around me but perhaps for you it’s different? Now that I am in Jordan, I am a refugee. Before I was just Meera. I’m 18 now. Now I have many ways to identify myself. I am registered with the commission and to them I am a number, I sometimes feel this number is my most important name. But I hope one day I will simply be Meera again. I hope to leave Jordan, but for now we wait and I will create a nice home and take good care of my family. But one day we will leave.

My mother organised the marriage almost as soon as I arrived in the camp, she said I would be taken care of. It was the first good news I had had in months! Maybe years! At first I wanted to be with her, I wanted to be taken care of by her too, but it didn’t take long to become excited about a new future, my future.

The snow scares me, how can anyone live as if they are in a meat freezer?

I look around here and I am so happy to recognise so much from home, especially the weather, this makes me feel I am wrapped in the same air. I once saw a video of Canada where there was snow everywhere. The snow scares me, how can anyone live as if they are in a meat freezer? Maybe one day I will find out? We don’t live the same here at all but I try to be optimistic about things.

I am curious for the future. Are you? Do you think we are in safe hands? At this point, I don’t exactly know whose hands we are in. But I will take it one step at a time, and begin with the wedding. I hope to see you there!

Meera is inspired by the many interviews generously and bravely given by women in Jordan in 2018. A fictional account has been written in order to preserve privacy. Meera exists as an ode to the stories, experiences and characteristics of some but not all displaced women from Syria currently living in Jordan, the research was centred around early marriage, sexual health and reproduction.